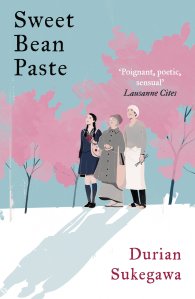 “The aroma seemed to leap up at him, as if it were alive, racing through his nose to the back of his head. Unlike the ready-made paste, this was the smell of fresh, living beans. It had depth. It had life. A mellow, sweet taste unfurled inside Sentaro’s mouth” [Sukegawa/Watts, 2013: 33].

This book, translated from the Japanese by Alison Watts (see also the movie trailer here), tells a story of Sentaro, a middle aged man who spends his time unenthusiastically selling dorayaki, a kind of pancake filled with sweet bean paste, to customers at the Doraharu shop, while consuming alcoholic drinks in his spare time. When an elderly woman Tokue approaches his shop and asks to work there, Sentaro first thinks it is a joke. However, Sentaro also tastes the bean paste cooked by Tokue and he is amazed by the flavours she can produce. What follows is a touching human story filled with the passion for food and the importance of appreciating small pleasures in life. Sweet Bean Paste is also so much more than a book about Japanese culinary delights and culture. It is a quietly beautiful book with the message of coming to terms with history, accepting people and recognising their talents no matter how small they may appear. Each person can contribute something to this world if others are willing to listen, learn and accept.

Sweet Bean Paste is not a long book by any measure and, with its short chapters, it reads in one breath. It also a book that has more depth and philosophy to it than it appears at first. Of course, the readers are immersed into Japanese aesthetics appreciated through cooking processes and Japanese take-away business arrangements, not to mention all the lovely Japanese environment with beautiful trees blossoming. However, this is only half of the book’s appeal. Sentaro, the appointed manager of the Doraharu shop, battles existential crisis and has secrets of his own to unveil, including his dark past, and when he meets Tokue, an elderly lady, she brings up the best of him. In turn, Tokue also has “shameful” secrets to hide. Both are unlikely people to be cooking dorayaki, and they form an unlikely team with an unlikely friendship growing between them. The characters subvert expectations. When Tokue arrives to the shop and start teaching Sentaro her own way of cooking, the shop is transformed and proves much more successful. But what price will both pay for that success?

There have been other books written on delicious food and its ability to bring people together, such as masterful in all its passions Like Water for Chocolate [1989], where the main heroine channels her forbidden love through cooking, and, of course, Chocolat [1999], where a small village unite in one passion for Vianne’s  unforgettable chocolate. Something like that also happens in Sweet Bean Paste, but with a twist. Sure, there is this shop on Cherry Blossom Street where one can buy a pancake filled with the most delicious sweet bean paste, and the reader could just taste its delicate sumptuousness when reading the book, but he or she also hears one important message – you never know where the destiny will take you, and, when you are down, there are certainly others who find themselves in worse situations. It sounds preachy, but the book is never overly sentimental or patronising. It has its humour, surprises, and is written in that magical Japanese style where the emphasis is on contemplation rather than action.

Sweet Bean Paste explores friendship, ups and downs of life and the importance of never giving up. The book also teaches us to be more observant in relation to our surroundings. “I pay attention to the language of things in this world that don’t use words…It’s my belief that everything in this world has its own language. We have the ability to open up our ears and minds to anything and everything. That could be someone walking down the street, it could be the sunshine or the wind” [Sukegawa/Watts, 2013: 134], writes Tokue in the book. Without giving any spoilers away, it is also fair to note that the book explores personal identity, and the issues of discrimination and societal prejudice. Guilt, redemption, forgiveness and the importance of embracing both your true self and change also inexplicably but convincingly form part of this little book.

Sweet Bean Paste may be a small book containing a simple story, but it feels important, significant and far-reaching. It really is a moving and inspiring story which is as heart-warming as a delicious dorayaki, well maybe with a bit of salt. It is not often that a book touches your very soul and, therefore, Sweet Bean Paste deserves the highest of marks.