American novelist Patricia Highsmith (1921 – 1995) is probably known for her Tom Ripley thrillers (among which is The Talented Mr Ripley [1955]), as well as for psychological suspense/thriller books that later also became films – Strangers on a Train, The Price of Salt or The Two Faces of January. Below are the reviews of her two books, novels that showcase the depth of this author’s psychological character studies and her admirable, low-key stream of suspense.

I first spotted this great book on Radhika’s Reading Retreat (check out her amazing blog and book recommendations!) and I knew I had to read it. In this story, Edith Howland moves with her husband Brett and her young son Cliffie from New York City to Pennsylvania. The family is not rich and hopes for the best in their new community. Edith starts to run a political newspaper in the new place, while keeping in touch with her old neighbours in New York and her wealthy aunt Melanie. Pressure on Edith intensifies as her son Cliffie becomes first troublesome then passive and aimless in life and Brett’s uncle George arrives to demand attention to himself. Soon, it is evident that the life that Edith imagined for herself and her family does not quite accord with reality and Edith finds herself increasingly prone to fantasising as she writes in her dairy. What will be the cost of this fantasy? – Simple paranoia and mental health concerns, or maybe the complicity in the death of another person? Edith’s Diary is a nuanced, psychological novel full of hidden, but real fears, and a quietly disturbing account of a woman whose repressed despair caused by social and personal expectations may just surface to lead to tragic results.

Edith’s Diary shares certain similarities with Yates’s Revolutionary Road [1961], Perkins Gilman’s The Yellow Wallpaper [1892] and Levin’s The Stepford Wives [1972]. The common theme is life in American suburbia during the Vietnam War (1950s – 1970s), where some people live the lives of “quiet desperation” and “suffocation”, making their appearances of normality and conformity at whatever cost, even if their minds go to pieces behind closed doors. These are the lives that few people wanted to acknowledge at the time, but Patricia Highsmith certainty does want to highlight these. The message is that social expectations and roles sometimes lead to nowhere. In this case, when a person does try to cope with the “Fall of their American Dream” through no fault of their own by choosing to follow their eccentric means, the society stops this behaviour and only gives them back the medicine of their own failure to chew for the rest of their lives. Given these circumstances, the most successful human being in the society will be the one who is the best actor, who does not think too much about the truth behind his life, presenting the right image to the world: “Where was the enemy? Who was it? It was right here in the house, Edith thought” [Highsmith, 1977: 174].

The main character here is sympathetic Edith. On the surface, she is an exemplary wife and mother who wants to be active in her new community, promoting intellectuality and knowledge. However, she soon faces circumstances beyond her control, including the unpredictable behaviour of her son, the “irrational” actions of her husband and the heavy burden of Brett’s uncle George: “like a boat (she thought) gliding smoothly to a shore, she moved closer to her worktable and sat down. But it wasn’t like that. If she wanted to think of boats, she was like a ship without a rudder now, without an anchor, turning on a dark sea, not knowing direction, unable to manoeuvre if it knew”. To maintain her illusion of control, Edith keeps repeating her own peculiar philosophy of life and keeps a diary that slowly helps her to erode the fine line between reality and fantasy to maintain her happy: “it was a fact that life had no meaning. One simply went on and on, worked on, and did one’s best. The joy of life was in movement, in action itself” [1977: 5]; “she didn’t believe life had any purpose, anyway. To be happy, one had to work at whatever one had to work at, and without asking why, and without looking back for results” [1977: 34]. Edith’s fantasies regarding her son become very elaborate in time and she retreats into her “make-believe” world as a number of deaths and betrayals in her life pile up. It also seems that not everyone is satisfied with day-dreaming Edith and she notices societal and familial opposition to her innocent fantasy world.

Edith’s Diary is a book that can be misunderstood. It is an intense psychological character study camouflaged as a simple and unpretentious family drama. Like many other books by Highsmith, it is not events themselves that make us intrigued and emotionally-invested, but the effect they have on the main characters as they slowly realise their tragic predicament. It is precisely the truth of certain realisations in the novel that we cannot deny that makes this book so good. This is the remarkable talent of Highsmith who can say everything while saying virtually nothing, putting her character through the paces that involve moral dilemmas. Did Edith become sad, mad or simply complacent? Or is her reaction simply that which a normal person would have experienced given her circumstances? All these questions are of interest to Highsmith.

The power of a bit depressing but spellbinding Edith’s Diary does not lie in the language (Highsmith did not believe in beautiful language in literature), nor in the ending (it is too “neat”), nor even in the character study. Rather, it is the staggering overall effect of the novel which is undeniable. We expect something known and familiar, and yet, with Edith’s Diary, we will be served with something different and fine – we will be served with the truth, and we will certainly feel it. 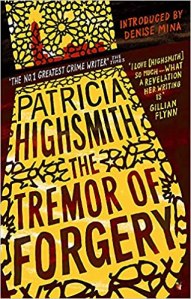 In this thriller by Highsmith, Howard Ingham, an American writer, finds himself in hot Tunisia. He is there to help shoot a film based on one of his books, but, mysteriously, no one appears from the people he is supposed to work with. Then, he finds out that the film director has committed suicide in New York, and, at his point, a psychological/spiritual gulf seems to grow between him and the people who he has just recently left in America. Amidst camel rides, couscous dishes and friendly banter with the locals, a corpse appears on Ingham’s path and one violent act soon makes him question his own sense of morality. The Tremor of Forgery might not have aged well, but it is still a quietly-thrilling book by the author who knows how to keep delicious suspense until the very last pages.

Similar to Highsmith’s The Talented Mr Ripley, there is a possible murder happening during one’s protracted mission abroad, people arrive to join the main character unexpectedly and delays in the receiving of letters means that the main character feels stranded and abandoned in a world foreign to him. The letters to and from New York which Ingham receives give plenty of opportunities to make all sorts of wrong interpretations and Ingham feels he does not have sufficient control over events. There is also the danger that Ingham, who starts to write a novel called The Tremor of Forgery, starts losing his grip on actual reality as Tunisia’s climate and his isolation make him more productive, but also more imaginative: “He had never known the sun so close and big. People farther north didn’t know what the sun was like, he thought. This was the true sun, the ancient fire that seemed to reduce one’s lifespan to a second and one’s personal problems to a minuscule absurdity” [Highsmith, 1969: 41].

It is little wonder that Graham Greene, the author of The Quiet American [1955], said that The Tremor of Forgery is “Highsmith’s finest novel” – like Greene’s The Quiet American, The Tremor of Forgery concerns a relationship between two English-speaking (one younger and one older) men who find themselves in an exotic place during civil unrest and on different sides of “a moral compass”. There is also the mention of a spy in The Tremor of Forgery and one character decides to stay in a country for a different purpose that was originally planned. In Highsmith’s narrative there does not seem to be anything unusual going on for most of the time, but there is still this feeling that something is amiss. These are small things, but they compel us to read further. This is coupled with Ingham’s growing doubts about himself and his past relationships with women – “suddenly, everything seemed so doubtful, so vague” [Highsmith, 1969: 34]. Then, Ingham meets Jensen, a young painter, who is undisturbed by Ingham’s growing indifference as to the plight of local people, while Ingham is increasingly trying to adopt “a native way of living” after one unfortunate incident during the night.

Moments of quietness in Highsmith’s books are deceptive and should not be taken for the lack of action or ideas. Highsmith is a very clever writer and does not have to rely on plot twists every chapter to keep us intrigued. There is no sense of pressure in her book to move forward with the plot or reveal to us action or something substantial to get us interested – and yet, we are and will be interested. The same can be said about Highsmith’s secondary characters – the author has no intention of making them overly interesting or extraordinary – although they have their eccentricities, they still come across as rather ordinary – they simply are what they are.

The Tremor of Forgery has some unlikeable characters and it is hard to imagine it being published today because of the presentation of local people in the book and certain other themes (even though it is clear that the point of view here will be the American tourists full of prejudice). However, Highsmith is her usual brutal honesty here, presenting a convincing portrayal and insight into one character whose deepest fears are slowly being realised in a foreign and exotic to him country.

Do you like reading Patricia Highsmith? What is your favourite book/short story by this author?

11 thoughts on “Patricia Highsmith: Edith’s Diary and The Tremor of Forgery”