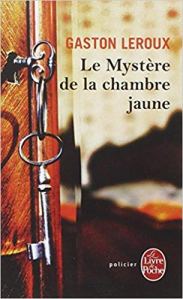 “Obvious signs have never been anything to me but servants; they never were my masters. They never made me that monstrous thing, a thousand times worse than a blind man – a man who cannot see straight” [Leroux, 1907/Ed. 2010: 126].

This French author influenced Agatha Christie and wrote The Phantom of the Opera [1910]. His name is Gaston Leroux, and some claim that his The Mystery of the Yellow Room is the greatest detective story in the world. This is a serious statement, but his story is also an ambitious one. Influenced by the stories of Conan Doyle and Edgar Allan Poe, Leroux conjured up his own, deciding to focus on the most fascinating of cases – the seemingly impossible crime. Miss Stangerson gets attacked in the Yellow Room of the Château du Glandier in a manner which says that her attempted assassin could not have easily come to the room, and nor could he have escaped from it at all after the attack. Miss Stangerson locked the room behind her when she went to her room and got attacked, and the adjoining room was occupied by her father Mr Stangerson and Old Jacques, their employee. The crime could not have been committed, or could it have? The case falls into the hands of a young crime journalist Joseph Rouletabille, and the young man is determined to prove that he is a match for the famous criminal investigator Frédéric Larsan.

The intricacies of the plot and the logistics of the crime are the driving forces of the story. We have an impossible crime committed with vital clues left behind, such as bullet holes and objects, and we are also introduced to a number of suspects, including Robert Darzac, Miss Stangerson’s fiancé, and even Mr Stangerson himself. The drawing of the plan of the room where the crime was committed enables the readers to participate in solving the mystery. We follow the reasoning of Rouletabille as he examines each of the clues in turn, from footprints leading from the castle to the handprint found on the wall. New suspects also emerge, such as the gamekeeper of the state and the concierges. We get to know more about connections between the characters, and, in the style of Sherlock Holmes, Rouletabille plays with the readers by coming to realisations, but not revealing everything he discovers. There are stories within stories, and, half way through the book, there is this great realisation that there are two mystery stories in there for the price of one. This is because we are confronted with yet another impossible action by the assassin committed four days after his initial assault.

Some reviewers have commented on the lack of atmosphere in the story, but I would disagree. The story is atmospheric. There are mysterious happenings at the Château du Glandier, and the readers really get the sense of the mysterious place, the unfathomable danger and the French charm. From Mary Shelley’s unforgettable Frankenstein [1818] to Jean Redon’s unsettling Les Yeux Sans Visage (Eyes Without A Face) [1959], there has always been something strangely eerie about the settings involving laboratories where people work and where profound discoveries are made through unusual and horrifying experiments. In The Mystery of the Yellow Room, Mr Stangerson and his daughter are also scientists on the verge of great discoveries, when the unexpected happens. Joseph Rouletabille, as the chief detective in the story, is such a breath of fresh air as well because he is so different from other known detectives. He is only eighteen years of age and a journalist, but where he lacks in experience he gains in enthusiasm and mental astuteness. It is easy for the readers to side with, and admire Rouletabille, even when he plainly wants to establish his superiority over a much older professional investigator or plays a definite fool chasing the elusive assassin through the corridors of the castle.

As the book progresses, it somehow starts to resemble The Phantom of the Opera, which Leroux will pen some three years later, and even has an aura of Conan Doyle’s The Hound of the Baskervilles [1902], for example regarding the setting. There is this mystery and obsession surrounding the female lead character and a number of men would like to know the answers and facts which only she knows. The ending of The Mystery of the Yellow Room is a bit too unbelievable, and all the leading up to the culmination is a little too theatrical/dramatical, but it is still all pleasantly unexpected.

On the negative side, the translated language does not have a natural flow on the page, and some mysteries in the story are explained by references to outside information, which the readers could not have known, meaning it was impossible for them to come to the conclusions on their own.

The Mystery of the Yellow Room is a short, exciting and intriguing detective story, which probably on par with Agatha Christie’s The Murder of Roger Ackroyd [1926], tells of the most ingenious crime scenarios. There is always something very fascinating about locked-room detective stories because so much thought and detail must have gone into their planning. The Mystery of the Yellow Room is no different, and the eccentric character of Joseph Rouletabille is the one to remember.

11 thoughts on “Review: The Mystery of the Yellow Room by Gaston Leroux”