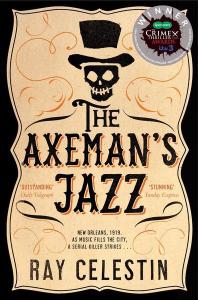 This is a debut historical fiction book that fictionalises real serial killer murders that shook New Orleans in 1918 and 1919 and were dubbed the Axeman’s murders. The book is a winner of the 2014 John Creasey (New Blood) Award, and I just could not pass by an opportunity to read this book since it is set in New Orleans of all places, a city that has been fascinating me for a long time and so much I have previously mentioned/talked on my blog about its history, art and notable celebrations. This very atmospheric book follows three people investigating the gruesome murders of the Axeman: (i) a professional investigator Detective Lieutenant Michael Talbot; (ii) a nineteen year-old amateur sleuth and secretary at a local detective agency Ida Davis, and (iii) a recent convict and once detective Luca D’Andrea. Each one of them is under pressure to discover the identity of the murderer before anyone else, and the task is not easy since the murderer taunts the police and leaves strange clues behind, such as Tarot cards. Soon corruption in high places, the Mafia and false leads all complicate the case, as well as the most recent strange demand of the murderer: “play Jazz on one particular Tuesday and you will be safe”. Charmingly evoking the atmosphere of one-of-a-kind place in the world which was New Orleans in the early twentieth century, Ray Celestin concocts a worthy-of-a-read crime thriller, even if it is at times slow, overwritten, unnecessarily confusing and wobbly in its logic.

The Axeman’s Jazz is based on real murders that took place in New Orleans in 1918, taking the lives of six people, and the author even reproduces in his book the real letters allegedly written by the murderer and sent to the press. Lieutenant Michael Talbot heads the official investigation in the story, trying to figure out why the killer would lock the door from the inside as he leaves his victims’ homes, as the Detective stumbles upon the most recent victims of the murderer – an elderly couple Mr and Mrs Maggio, who were killed with an axe in Little Italy. A young, book-smart girl Ida Davis also thinks she can uncover the identity of the murderer since she works as a secretary for the Pinkerton Detective Agency and has access to some evidence. Ida Davis and her friend musician Louis Armstrong think that, perhaps, an illegal activity conducted by one victim may lead them to the killer. As if the case were not crowded enough, on the scene comes Luca D’Andrea, recently out of jail and with connections to the Mafia. He is also pressured to find the killer by “The Family”. Ray Celestin then thinks that following all these characters and the murder investigation alone is not entertaining enough, because The Axeman’s Jazz then decides to concentrate on the childhood of Louis Armstrong; tries to gouge out the true relationship between Luca D’Andrea and his once protégé Michael Talbot (the theme of the “nemesis” in the police force in the style of The Beautiful Mystery); and also examines Michael Talbot’s secret family life.

The plot progression is sometimes rather slow and at other times rather predictable, as we also find out more about different characters as the story moves along. Ray Celestin is also a screen-writer and his story may appear to us unusually “cinematic”, with virtually every scene he describes having qualities of a good film. For example, there is a paragraph in the book where two characters sit near the porch in the evening looking into the distance, and we can just imagine this perfect scene in a film as these characters contemplate the unusual lights in the distance called “jack o’lanters or will o’the wisps”, being “ghostly phosphorescence, that…sweep across the black ground” that also reflect in these characters’ eyes.

The atmosphere in The Axeman’s Jazz is one of a kind, and we are truly transported into historic New Orleans, that finds itself in transition (the Prohibition is just around the corner) and nervous as a result of the presence of one deranged killer on the loose. We are taken through the streets of the city which is already very multicultural in 1918, with Creole, Cajun, Irish, Chinese, Greek, Italian, Jewish and other communities living side by side with each other. The result is both a charming and disturbing portrait of the city; for example, the perspective of Luca D’Andrea is as following: “He knew the city was no paradise; it was violent and unforgiving, awash with criminals and immigrant communities that treated one another with hostility and suspicion. But it was also a city with a beguiling energy to it, a bright and opulent charm. For all its segregation and spite, its shabby streets and faded glory, it was easy to become bewitched by the city of New Orleans” [Ray Celestin, 2014: 29]. There is also this sense in the novel that New Orleans is not just another American city, as the Mayor of New Orleans also says in the book: “Everything’s different in New Orleans…it’s an American city, sure enough, but it’s an American city named after a French Duke, in a state named after a French King. We drink our coffee different, cook our food different, play our music different. We name our squares after African countries, and our streets after Greek myths. We bury our dead aboveground, but build our city below sea level. We celebrate Mardi Gras, not Shrove Tuesday, we have parishes not counties, we don’t ban vice, we legalise it. We’ve been different since a handful of French traders came here and decided, against the good advice f their Indian guides, to build a city on a marsh” [Ray Celestin, 2014: 69]. 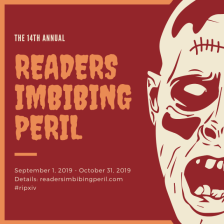 As a debut crime thriller, The Axeman’s Jazz can be seen as a curious book with the right atmosphere and enough secrets to uncover. However, the presence of a number of central characters and the multitude of different clue-following also inevitably lead to confusion, and the focus on the past of some secondary characters also means much unnecessary digression. The result is that The Axeman’s Jazz is too crowded a dance-floor of a book, even if jazz is music that has no strict rules and many people/characters can move freely. Where the book excels is in paying a tribute to the music-loving, multicultural city that is New Orleans, even if that tribute is dark, unsettling and with a touch of the macabre.

This review was written as part of the 14th Readers Imbibing Peril Reading Challenge.

7 thoughts on “Review: The Axeman’s Jazz by Ray Celestin”