I spotted this tag on Katie Jane Gallagher and Strangely Pop Cultured, and decided to try it because I just could not resist doing an autumn-themed book tag.

I. Pumpkin Spice Latte: A Book That Everyone Criticises But Is Actually Delicious:

Osceola, the Seminole by Mayne Reid.

This is a book that some say is only “for children” and “cannot be compared to the works of Jack London or Robert Louis Stevenson”. Well, I have another opinion. This book is THE book of my childhood, alongside other books by Mayne Reid, such as The Quadroon [1856] and The Scalp Hunters [1851]. Osceola, the Seminole has a great sense of adventure and induces warm feelings of friendship and romance. If you liked Jack London’s The Sea-Wolf [1903], then you should also check out The Boy Tar [1859] by Mayne Reid.

II. Fall Is My Favourite Season: A Cliché You Can’t Get Enough Of:

Characters that battle their own inner existential crises.

III. Sweater Weather in the AM and T-Shirt Weather by the Time You Get Out of Work/School: A Book You Thought Was One Thing But Was Completely Different By the End:

The Crime of Father Amaro by Eça de Queirós.

No one prepared me for the surprise that is The Crime of Father Amaro. What started as a romance – sympathetic and forbidden love of the main characters – turned out to be something else entirely. I believe that Eça de Queirós was one of only few authors of the nineteenth century that set out to truly subvert their readers’ expectations.

Even though I love Halloween and classic horror films, I do not have that many traditional “horror” books on my TBR list – I guess I am more into mystery books, crime fiction and thrillers (with horror elements in them).

The Penguin Book of Witches by Katherine Howe (editor).

This book sounds like my cup of tea. It apparently combines all sorts of materials that shed light on the practice of witchcraft through the ages, from manuals for witch-hunters written in the middle ages to court documents pertaining to the Salem witch trials. Its “sister” books – The Penguin Book of the Undead and The Penguin Book of Hell by Scott G. Bruce (editor) – are also worth checking out.

The Need by Helen Phillips.

I have had this book for awhile now on my TBR. The premise certainly sounds interesting, even if not all reviews are encouraging on goodreads: “When Molly, home alone with her two young children, hears footsteps in the living room, she tries to convince herself it’s the sleep deprivation. She’s been hearing things these days. Startling at loud noises. Imagining the worst-case scenario. It’s what mothers do, she knows. But then the footsteps come again, and she catches a glimpse of movement…” (goodreads). The book is also said to be “a subversive, speculative thriller that comes to life through blazing, arresting prose and…haunting imagery“…being “a glorious celebration of the bizarre“. 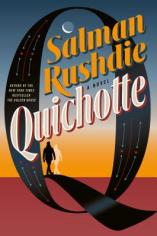 I have to admit I am currently very excited about this re-working of Cervantes’ Don Quixote, but set in the 21st century. The more I learn about it, the more eager I become to read it, especially when I read such sentences: “Just as Cervantes wrote Don Quixote to satirise the culture of his time, Rushdie takes the reader on a wild ride through a country on the verge of moral and spiritual collapse” (goodreads). Quichotte is now shortlisted for the Booker Prize 2019, and I am very impatient to read it. 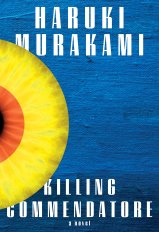 VI. Sephora Sage & Crystal Set: A Book That Means Well But Missed the Mark by a Landslide:

Killing Commendatore might not have missed the mark by a landslide, but it still missed its mark, in my opinion. The synopsis is interesting, but I became soon very bored with it. The protagonist is an artist who has just separated from his wife and strikes “friendship” with his rich neighbour (a tribute to The Great Gatsby), oh, and he finds the Killing Commendatore painting in the attic of his father’s home (a tribute to…Donna Tartt’s The Goldfinch? (just kidding)). Other characters emerge, including a young girl, and there is some surrealism, but also much repetition and some very strange paragraphs/dialogues. What do I make of this book? Well, I cannot even be bothered to begin to think about it.