Remedios Varo (1908 – 1963) was a Spanish/Mexican surrealist artist best known for her enigmatic, mystical and “alchemical” paintings, that “[blended] surrealist techniques and images, Freudian and Jungian psychology, science, magic, and the occult” [Vosburg N. (2005) Strange Yet “Familiar”: Cats and Birds in Remedios Varo’s Artistic Universe. In: Figuring Animals, 2016]. Below, I present and briefly discuss her three paintings. 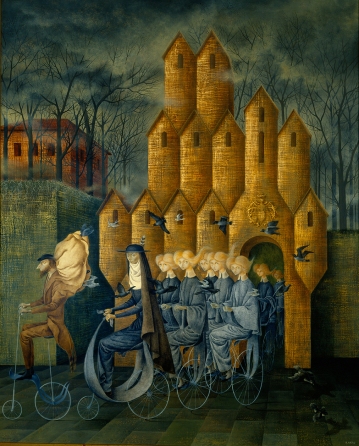 Towards the Tower depicts a number of identical girls dressed in identical clothing that are whisked away by a man and a woman on bicycles. They are moving away from houses that resemble a beehive. Given Varo’s catholic upbringing, the wide interpretation of the painting is that the woman leading the girls on the bicycle is a nun and the girls are pupils in a convent. The girls share similar features as the artist wanted to underline the rigid conformity of the place. The beehive-shaped houses also underline the idea that the girls work towards one common goal (like bees) and their individuality is supressed or ignored. The “magic” numbers are also present here – we see twelve houses (for example, there are also twelve months), and seven girls (there are also seven days in a week). This is the first painting in the series of three paintings that depict the same women who first flee the houses (the convent) to get to the Tower, and then escape. The third painting (The Escape) shows a girl on a journey with her love.  END_OF_DOCUMENT_TOKEN_TO_BE_REPLACED