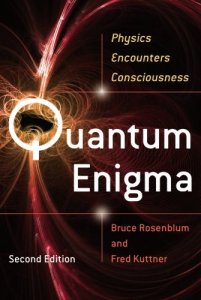 “The universe begins to look more like a great thought than a great machine” (Sir James Jeans).

Did you know that it has been experimentally proven in physics that the way you decide to look at something (your observation) changes that something or dictates/creates its locality/position? This happens on the atomic level and no one disputes that finding in the scientific community because this has been proved through the so-called “double-slit” experiment. However, virtually no one in the scientific community wants to consider what this finding means beyond its practical application. Quantum Enigma is a book that explores the divide that has emerged in science between Einstein’s theory of relativity, governing big objects in the universe and, the quantum theory that governs objects on the atomic level. The book provides a good historical overview of the knowledge so far on quantum mechanics, delving into the famous “double-slit” experiment and the Schrödinger’s Cat Paradox. In this sense, it is a great book for those completely unacquainted with the topic because it explains concepts in a very clear and unhurried way. The downside of this, of course, is that the book is needlessly repetitive and provides very few, if any, fresh ideas beyond the already established knowledge.

I initially assumed that Quantum Enigma would start straight with the workings of quantum mechanics, explaining its basic concepts (with the reference to the laws governing big objects), but the book starts with Ptolemy of Alexandria, and talks at length about the discoveries made by Galileo Galilei and Isaac Newton, underlining numerous times that quantum mechanics call into question the “separability” principle (a notion that every object is separate/different from any other) established previously in science and provides proof of universal “connectedness” (each object in the universe is connected and influenced by any other). The book then goes to explain electromagnetic forces and Albert Einstein’s theories of relativity, before jumping into the science of quantum mechanics, talking about the early discoveries of Max Planck, Albert Einstein and Erwin Schrödinger (the debate whether light is a wave or a particle). After that, there are detailed explanations of the various phenomena of quantum mechanics, including the (somewhat dull) Copenhagen interpretation that says that “only the observed properties of microscopic objects exist” [2011: 130], and the talk about how the workings of quantum mechanics can be seen in real life and in technology. Then, the Schrödinger’s Cat Experiment is explained in full and the so-called law of entanglement is put forward (objects can influence each other without any direct physical force existing between them, provided these objects made their initial contact at some point).

The last parts of the book are all about more mystical explanations of the quantum mechanics’ enigma, such as the explanation put forward by John Stewart Bell, and the implications of this for the concept of consciousness. The quantum enigma resides in the fact that “the observed cannot (seem to) be separated from the observer”, that “the physical reality of an object depends on how you choose to look at it” [2011: 72], and that a single atom may be found in two places at once. These are very difficult concepts to grasp for an ordinary human being, but the double-slit experiment proved that they are scientifically correct statements. 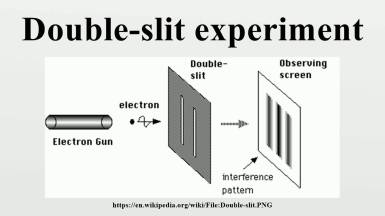 In brief, the double-slit experiment tells that if you direct one light electron into two opening slits in the wall that are positioned in parallel to each other, and start observing that electron of light, it would behave as a single particle, entering either of the two respective slits, and hitting the wall behind the slits, showing just one mark on the wall. However, if you direct that one particle into two opening slits without observing it at any point, it would behave as though it is a wave – passing somehow through two slits at the same time, creating an interference pattern on the wall behind the two slits. So, are electrons of light waves or single particles? The scientific answer is that they are what you want them to be. Your decision to show them as either participles or waves determines whether they would behave as such. If you choose to use two slits and decide to observe how a single electron can create an interference pattern by passing through two slits at the same time, the electron would immediate act as though it is single particle as though it is aware you are watching it. It is as though it does not want you to see how it passes through two slits at the same time. The conclusion is that the external reality at the atomic level is all about you and your observation. You create the reality for that electron and its place. That is what experimental physics currently says. “The reality of the physical world depends somehow on our observation of it” [2011: 54] and “quantum theory… denies the existence of a physically real world independent of its observation” [2011: 7].

Thus, the last chapters of Quantum Enigma talk about how this phenomenon may be explained, and such explanations are given as the parallel universes or the Many Worlds Theory and the idea that our free will may not be “free” at all, but predetermined in advance (otherwise, how would electrons have known in advance what experiment we would choose to do?). It seems that the external reality is created at the atomic level based on our previous beliefs and perceptions – based on our observation. We still do not know much about consciousness and how it arises in the brain, and some scientists believe that there are parallels between the quantum enigma and the mystery of consciousness. This parallel may have something to do with our perception, free will and observation.

The negative aspect of the book is that there are not many theories in the book that speculate about the quantum enigma, trying to provide a sound explanation of it, and there are none coming from the authors themselves. The book reads like a history of quantum mechanics for beginners and there is much needless background information. Rosenblum and Kuttner also make a weird choice of repeating the quantum mechanics’ enigma in an imaginary school setting with one teacher explaining the theory again in the book in a rather strange and allegorical way.

Quantum Enigma will be a good book for those who have very little knowledge on the subject and who are curious about the mysteries of quantum mechanics. The book is thought-provoking as it suggests that our scientific knowledge is incomplete and there is still much we do not know about the universe, its workings, as well as about our own perception of reality. In this respect, the book gives much food for thought, and many scientists nowadays are also trying to explain the quantum mechanics’ enigma by seeking answers elsewhere – beyond the realms of physics and science. Another interesting thought is that science seems to be finally catching up with what ancient wisdom (such as Buddhism) has been telling us all along and, perhaps, we are simply limited by our brain functions and this stops us from understanding fully the universe’s working and the nature of reality (including the concept that an object can be in two places at once and its very creation and position may come from within ourselves).

(when you buy from my website I earn a small commission, so if you like what I do, you can support me this way)