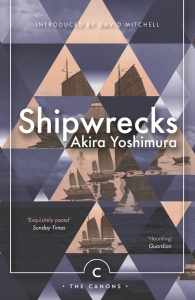 Shipwrecks is a short novel translated from the Japanese by Mark Ealey. It tells a story of one village in rural medieval Japan, following one boy Isaku, as his family struggles to get food essential for their survival. The village has a number of rituals, but one is particularly eerie: the village does everything it can to summon O–Fune-Sama (the Sea God) or shipwrecks to their coast. This phenomenon is often essential for the survival of the village (since ships carry the necessary food and other commodities), and Isaku and his family are always eagerly awaiting the season when O-Fune-Sama or shipwrecks occur. One day, such a ship does come to the shore where Isaku lives, but will it be a blessing or a curse for the village? Those who like books with discernible plot points and fast-paced action should look elsewhere. Shipwrecks by Akira Yoshimura is rather slow and contemplative in nature as it follows day-to-day activities of one village that has one eerie desire. However, despite based almost entirely on observations, the novel is no less fascinating and is subtly powerful. It is a great read for anyone who likes unusual stories which uncover different ways of looking at life.

The plot is simple, but realistic, and the main character here is the village itself and only then Isaku. Isaku is a mere boy, but he has to grow up fast and become a provider to his family because his father sold himself to indebted servitude to feed his family. The story then follows the usual activities of Isaku as he goes fishing with his younger brother, thinking about a girl Tami, hoping that someday he will marry her. Isaku has trouble catching the saury and hopes that his cousin will show him the ropes. This all sounds uneventful, but the story is quietly beautiful and has much meaning. The changing seasons in the village bring to mind beautiful woodblock prints of Japan’s long-forgotten era, and the descriptions of the village’s rituals both fascinate and unsettle. The village of Isaku is, indeed, steeped in superstition, and it is fascinating to get to know the psychology of its people as they try to survive in the harsh environment, including by following strange rituals. The story shows the time when villagers measured time by natural phenomena, be it the arrival of the octopus to their shores or the reddening of the leaves. They also say “Hour of the Ox” (2 a.m.) or “Hour of the Tiger” (4 a.m.) to refer to some points in time, and spent time thinking about the sea produce and the change in the nature’s clock, “after the sardines, squid began to appear” [Yoshimura/Ealey 1982/96: 37].

However, the “stillness” and “calmness” of the village’s life and the narrative itself are deceiving. The people in the village battle everyday to stay alive and the food is scarce. The people live in the environment where death from some disease, fall or starvation is just around the corner. There are camouflaged dangers in existence, and it is interesting to read what actions the villagers take to survive. One such action involves burning fires under cauldrons nears the shore to summon O–Fune-Sama or induce a shipwreck. If a ship in distress during bad weather sees some light on the shore, they may think it is houses and take its direction towards the coast only to be wrecked on the reefs. This way the villagers will have their bounty and no one will starve during years to come.  It is impossible to overemphasise the desire for O-Fune-Sama or shipwrecks by the villagers: “the lives of the villagers hinged on the coming of O-Fune-Sama” [Yoshimura/Ealey 1982/96: 23]; “If O-Fune-Sama did not grace their shores soon, there would likely be a flood of people leaving to go into bondage” [1982/96: 58]; “O-Fune-Sama was nothing less than deliverance from the fear of starvation” [1982/96: 73]. As time passes, Isaku and his family become more and more desperate for O-Fune-Sama to occur, and a powerful image emerges of a village in crisis. At this point, the author also demonstrates that morality is relative for these people. The villagers wish for the disaster befalling others in order to survive, but what other choice do they have? In that way, the novel is also thought-provoking. Near the end of the novel, the long-awaited ship does come, but is it really what everyone has been looking forward to?

Shipwrecks is one of a kind novel with its emphasis on description over action. It is also a novel to be savoured and not rushed. It presents realistically an interesting world of one village that is desperately wanting to survive by wishing danger befalling others. In this way, the novel interestingly uncovers the psychology of a superstitious village in distress, offering a fascinating insight.