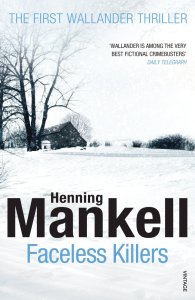 This is the first book in the Kurt Wallander detective series penned by Henning Mankell, a Swedish author, who in 1992 won for this book the first ever Glass Key Award, given to authors from the Nordic countries. The translation of 1997 is by Steven T. Murray. In this story, Inspector Wallander is called upon to investigate the savage double murder in Lunnarp, Skåne. A husband and wife (Johannes and Maria Lövgren) are found brutally killed with mysterious clues left behind, such as the fact that the killers allegedly fed the farm horse before they left. The investigation team soon notice that the area where the murders happened is very isolated, relatively peaceful, and they have no immediate suspects. As the investigation continues, Inspector Wallander confronts clues that point to the possibility of foreign nationals being responsible for the murders, and then have to deal with the hate crime and racially-motivated attacks. If the first part of this book is this exciting mystery-thriller where we also delve into the character of Wallander and uncover the extent of his personal problems, the second part of the book is a less compelling narrative of an investigation of another crime which leads to a predictable conclusion.  END_OF_DOCUMENT_TOKEN_TO_BE_REPLACED