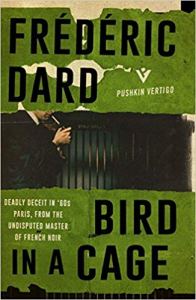 This short existential noir thriller tells of Albert, a thirty-year-old man, who arrives to his Paris apartment where he grew up. His mother died some years before, and, feeling nostalgic, Albert wonders around his Parisian quartier, trying to recall happy memories from his childhood. His day-dreaming is cut abruptly short when he meets a beautiful and enigmatic young woman with her daughter at the restaurant he never dared to go into before. Like some nightmare that he is unable to shake off, Albert soon finds himself trapped in a mystery so confusing and layered it is beyond his wildest imaginings – a dead body and a seemingly impossible crime emerge, and accounts of what happened are all as numerous as they are all improbable. Recalling the work of Georges Simenon, Bird in a Cage is a disturbingly delightful read, which is also suspenseful. Perhaps Dard is not as clever as he thinks he is with his big reveal, and much is left both unaccounted for and unbelievable in the story, but his concise and stylish approach to telling the story, that includes both existential and erotic themes, is rather fitting and appealing.

In the style of a Belgian crime writer Georges Simenon (The Blue Room [1960]), Bird in a Cage relies on “clever” turns of events, dialogues and subtle plot points to tell its story, rather than on lengthy character insights or descriptions. Our narrator, Albert, is quite introspective and we do not know much about him at the start. In the style of Camus’ The Outsider [1942], the author builds our sympathy for Albert from the start when we find out that his mother died sometime previously and only now Albert has the opportunity to revisit the apartment of his childhood and come to terms with her death. In this sense, the novel has some existential themes, but it is also filled with erotic longings – “the only real pleasure in the world is to satisfy a need” [Dard, 1961/2016: 14], says the narrator. When Albert meets one mysterious woman with her young daughter in one restaurant, he thinks he can finally put all his troubles behind him, only to realise later that his troubles have only just began. The book is highly suspenseful and intriguing from that point onwards, and we become witnesses to numerous comings and goings to and from Parisian apartments, which will be explained later. We also soon realise that the discovery of one body in an apartment and the repeated story cycles bear the truth and logic all of their own. As we read, we are invited to consider whether we do not perhaps deal with an unreliable narrator, or could this person really be an innocent one, caught in a deadly game that is beyond his abilities to master? Filled with adulteries, objects’ fixations and apparently senseless actions, Bird in a Cage is a mystery within a mystery, and is certainty making us turn the pages.

The main issue with this novella is that the author does not really tie all the loose ends in the end, providing some unbelievable explanations for unbelievable events unfolding, and even Dard’s big reveal at the end is not a twist per se, but simply a surprise, a surprise that is baffling because it is certainly not very realistic, even by the parameters of very fantastical detective fiction and, most certainly, not in the context of the police investigation that is ongoing in the book. In this sense, Bird in a Cage is simply an enjoyable read that has a surprise reveal, rather than some mind-blowing and intelligent twist. Moreover, that surprise reveal seems to bathe in its own underwhelming construction, almost drowning in both its medical expertise and common sense deficiencies.

5 thoughts on “Review: Bird in a Cage by Frédéric Dard”