HYPER JAPAN is a festival held in London, UK twice a year to celebrate Japanese culture and all things related to Japan: from manga and Japanese video-games to traditional arts and crafts, and Japanese food. I attended this festival for the first time on Sunday 14th July, and below is the summary of my experience (apart from the official poster for HYPEP JAPAN, all pictures in this post are mine).

I will start with food because it can be so distinctly Japanese. There were many stalls at the festival (the Japan Food Show) selling delicious Japanese food (sea-food, soups, etc.) and also boutiques offering to try sake (an alcoholic drink made from fermented rice) before buying a bottle. I do not want to advertise alcoholic beverages on my website, but a “sweet & sour” Japanese plum liqueur “Kanjuku-Umeshu” was a rather interesting drink.

I was also particularly impressed to see a stall selling dorayaki, which is a pancake filled with some tasty ingredient/paste, usually red beans. There were many dorayaki to try, and I went for a traditional red beans one, which was absolutely delicious. I previously read and reviewed an amazing book Sweet Bean Paste [2013] by Durian Sukegawa and it was all about how to cook 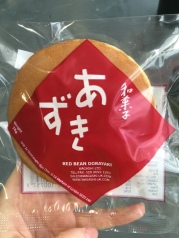 a perfect dorayaki. Thus, my experience was somehow even more special. Other sweets and drinks from Asia were also on offer, and I tasted a Pikachu Pokémon Soda (Ocean Bomb) and also some Pocky Matcha Green Tea, a snack.

Of course, for many, the HYPER JAPAN festival is all about cosplay and there are many opportunities to take pictures with favourite anime and manga characters (people dressed as such, of course). The variety of activities on offer was amazing, and one may play Super Mario (developed by Nintendo in 1985) one minute, the next watch a live-demonstration of aikido, a modern Japanese martial art, then learn how to craft a teru teru bozu, a traditional handmade doll, and finish your “experience” by seeing an idol group from Japan perform live. The “idol” culture is huge in Japan, with idols being young starlets performing on stage who are “worshipped” by fans for their image, attractiveness or personality – Perfect Blue [1997], a great Japanese animation for adults by Satoshi Kon, portrays the “dangers” of this profession very well. 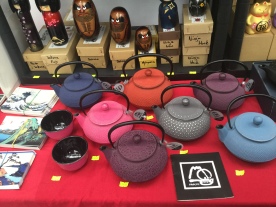 There was also the representation of a traditional Japanese garden on site and bonsai to view. The option of different things to buy was just overwhelming: from traditional kimonos to kawaii soft toys, and from manga (anything from Naruto to some obscure comics) to traditional Japanese cutlery and samurai swords. 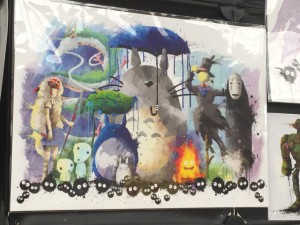 The thing which I found and liked is the beautiful pictorial representation of the Studio Ghibli characters – both a poster and a bag were sold with the beloved characters. I am a Studio Ghibli fan and love all of Hayao Miyazaki’s creations, especially Kiki’s Delivery Service [1989], Spirited Away [2001] and Howl’s Moving Castle [2004]. These animations are absolutely beautiful, heart-warming and character-driven. Spirited Away is probably the greatest animation of all time.

Overall, the HYPER JAPAN festival was a fun experience and I particularly enjoyed the sheer variety of things to try (and taste!) connected to Japan. However, the price for one single ticket to simply enter the exhibition centre was still a bit too high (£22) for what was on offer and I would have liked to see more of the traditional Japanese culture.