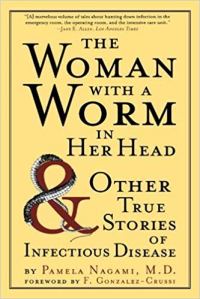 The Woman with a Worm in Her Head is a topical non-fiction book since it talks about those infectious diseases which present a real puzzle for medical staff. Referring to her experience of working as an infectious disease doctor, Nagami talks about real patients with such seemingly surreal diseases as cocci or valley fever, leishmaniasis, chickenpox and falciparum malaria, and, of course, with live worms loose in their bodies which cause havoc and distress. Nagami’s book is definitely not for the faint of heart or the squeamish, but those who are interested in mysterious diagnoses or in unusual and rare medical illnesses will find much to appreciate in this book.

As a doctor, Nagami has an unusual approach to dealing with infectious diseases caused by worms getting inside the human body:  “like a detective, I was analyzing motive, means, and opportunity for each worm”. Her efforts do pay off, as in one case of one man who ate a raw cobra and was infected with an insidious worm, developing a high fever and pains as a result. Nagami is clear about the extent of the harm that worms can cause after someone ate an exotic meal: “the tunnelling worm sometimes finds its way into the brain. When this happens, fatal damage follows”.  “A Fever from Africa” is a fascinating chapter in the book, and illnesses from Africa are, indeed, numerous and frightening, from Ebola hemorrhagic fever to onchocerciasis or river blindness prevalent in West Africa. From Nagami’s first-hand account it is fascinating to learn about unusual diseases, as well as about equally unusual treatments that follow, even though the book at times turns very sad because not all Nagami’s patients make it alive.

“[[City] people] may not know that Chile’s capital Santiago is still a good place for a traveller eating a salad to catch typhoid fever. And they forget that in tropical regions, the insects and the serious disease they transmit, don’t always respect urban boundaries”.

With all due respect to the author, it is not as interesting to read about Nagami’s biographical details and medical training as it is about infectious diseases and details about her patients. The narrative even turns annoying at various points because, although Nagami is a licensed physician, she often hints that “medical procedures are not really [her] thing”, has panic attacks after patients’ visits and even thinks at one point that she infected herself with HIV after breaking her skin with the same object she used on an infected patient.

As a memoir, The Woman with a Worm in Her Head is not terribly exciting; but, as a book on unusual and horrifying infectious diseases – it is fascinating. Near the end of the book, Nagami writes: “My hope in writing this book is not to create unnecessary fear, but rather to educate readers about the potential for danger lurking in everything, from salads to the very air we breathe.” This sentiment could not have been more timely than it is today when societies around the globe fight against Coronavirus and its impact. No one is ever immune to a wide range of scary infectious diseases, and gaining more knowledge about them and their transmission (which may lead to complete prevention or early diagnoses) may save lives.

13 thoughts on “Mini-Review: The Woman with a Worm in Her Head by Pamela Nagami ”