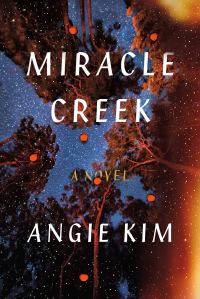 “There are no facts, only interpretations” (Friedrich Nietzsche).

I do not read many legal thrillers or courtroom dramas anymore (through I do read crime and detective stories). My “John Grisham” phase ended many years ago, and since I have a background in law, I tend to avoid fiction which makes me ceaselessly question/criticise legal inconsistencies/mistakes in a book. I had to make an exception with Miracle Creek, because there has been an overwhelmingly positive response to this courtroom thriller and debut book, and I just could not pass by an opportunity to read what has been called “a jaw-dropping, page-turner” of a book. Miracle Creek, is, indeed, not one’s ordinary legal thriller. Angie Kim centres her story around a pressured oxygen chamber or the Miracle Submarine that is used as an experimental treatment device in Miracle Creek, Virginia. The Miracle Submarine belongs to Pak Yoo, an immigrant from South Korea, who tries to do his best in the US so that his wife and daughter can find happiness in this foreign to them country. When a fatal accident happens at Pak’s treatment facility, one leading suspect emerges, but is the case as clear-cut as it appears at first? Soon, secrets, lies, and surprising relations between Pak Yoo’s patients emerge, complicating this seemingly open-and-shut case, as Angie Kim also makes insightful points on cultural divisions, on the issue of using certain experimental, controversial treatments to treat disabled children and on the trials of parenthood.

Miracle Creek is a story told through a trial that takes place over a four-day period. What makes this book distinctive is that the story (i) centres on such an unusual experience as being a patient that uses a pressured oxygen chamber to treat their disability/illness; (ii) told through a multiple persons-perspective; and (iii) indirectly makes references to the hardship of being an immigrant, and to the nature of being a mother, especially to a child with a disability. In August 2008, an explosion occurred on the business premises of Pak Yoo, and his Miracle Submarine was destroyed, killing two of his customers. One year on, the culprit is identified as Elisabeth Ward, the mother to a young boy who was killed in the explosion. Pak Yoo’s experimental treatment device of using hyperbaric oxygenation (“the administration of oxygen at greater than normal atmospheric pressure”) is actually a real, approved treatment that allows a patient to breathe pure oxygen in a pressured room to relieve a variety of symptoms. The day of the explosion was an ordinary day for Pak when his usual patients/customers went to the chamber for a “dive”…except for one person – Elisabeth. As there are few suspects in this case (Matt Thompson, a doctor, his wife Janine, Theresa Santiago, Elisabeth Ward, Pak Yoo’s family, protesters), the story at times reads like a cosy mystery where we get to understand different viewpoints on the terrible event that occurred (each chapter focuses on a different person). It is then interesting to follow this story where it is hard to glimpse the real truth because of each person’s different perception of what occurred on 26 August 2008. The emerging complex inter-relationship between the characters also starts to complicate the case.

It is true that much of this book is taken by the trial, including by some entertaining cross-examinations of key witnesses and experts in the case, but Angie Kim has another agenda in her book. The story of Pak Yoo and his family’s attempt to integrate and feel at home in the US is a parallel story, and we read how Mary, Park and Young’s teenage daughter, rebels against her presence in the foreign country. Mary’s discomfort in the US is certainly something I could relate to as well, since I also came to live in the UK from another, different culture when I was young. A Korean way of life is then contrasted with that from the US in the book: “Americans were so proud of things being a few hundred years old…they didn’t seem to realise that the world valued America precisely because it was not old, but modern and new. Koreans were the opposite” [Angie Kim, 2019: 17]; “…Americans didn’t like silence. It made them uneasy. To Koreans, being sparing with words signalled gravitas, but to Americans, verbiage was an inherent good, akin to kindness or courage” [Angie Kim, 2019: 162]. Child disability, motherhood struggles and the issue of using certain controversial treatments to cure disability are other prominent themes in the book: “Having a special-needs child didn’t just change you; it transmuted you, transported you to a parallel world with an altered gravitational axis” [Angie Kim, 2019: 35].

I would describe Angie Kim’s language in the book as “effective”. Virtually every sentence pulls the reader into the story and the book becomes “a page-turner”. The book opens with this line – “my husband asked me to lie. Not a big lie. He probably didn’t even consider it a lie, and neither did I, at first” [Angie Kim, 2019: 5]. We immediately think – what lie? A premise revolving around some deception? The narrative becomes irresistible. Another chapter begins with this sentence – “he would’ve given anything not to be here today. Maybe not his entire right arm, but certainly one of its three remaining fingers”. Few people can resist reading further after this sentence. Angie Kim is a clever writer because she feeds to us certain details about the case, while withholding other important information, prolonging the suspense – we know only certain “facts” about the explosion at the beginning of the story and have to turn pages before we arrive at the full picture.

Though Miracle Creek starts well, from the middle, it picks up familiar and overused thriller elements – secrets, lies and forbidden relationships emerge and will thrill in the same way as one’s usual TV melodrama will. The narrative even becomes slightly tedious when Angie Kim decides to be too clever in her design of the story, and starts to constantly switch the responsibility for the crime, as well as introduce a multitude of theories which overlap each other. Another problem is whether Kim’s story is as believable as it appears at first. The story does not seem to have taken into account any health and safely regulations – as though they do not exist in the US at all – , nor did it make a convincing case for Elisabeth Ward being charged with the commission of the crime in the first place.

Aspiring authors are often given this advice – “write what you know”. Angie Kim, being an immigrant and a lawyer, has certainly stuck to that rule and has concocted a story every passionate-about-criminal-law student would dream to think about and apply legal principles onto. The result is that Miracle Creek is a very good first book with some complicated legal scenarios emerging, providing for an entertaining read as we try to guess the truth behind the horrific event. Even though the author cannot help but overdramatise the events, and her story does have predictable, melodramatic elements, Miracle Creek is still a worthwhile read, not least because of some unusual circumstances in the case (an unconventional oxygen treatment), multiple perspectives narrative and an insightful focus on one immigrant family.