This November I went to New York, NY to celebrate my birthday, and am presenting some of the slightly off-the-beaten-track highlights of my journey below. New York is magical in autumn when it is covered in all those bright red and yellow leaves and it is not yet too cold. 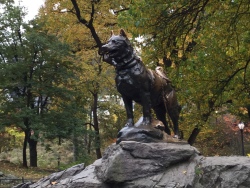 Starting with Central Park or “the Green Lung” of New York, there are a number of interesting statues and sights there, including Strawberry Fields, dedicated to John Lennon, Hans Christian Andersen statue and the Loeb Central Park Boathouse. My favourite has got to be the statue to Balto, a heroic sled dog that led his team on the final journey to transport serum to Nome, a town that was battling an outbreak of diphtheria in 1925. Those who have seen the animation Balto [1995] will be particularly impressed. Some people criticise the monument, saying that Balto was simply the last in the relay race to deliver the medicine with his man, but it is also fair to say that the statue symbolises the tribute to all sled dogs that were involved in this race to save lives, including to Togo and Jack. 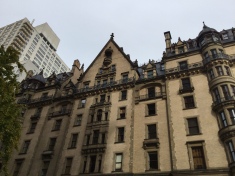 Nearby, there is also the infamous and majestic-looking, in all its Gothic glory, Dakota Building, which was built in 1884 across from Central Park and was the city’s first luxury apartment block. It notoriously housed a number of celebrities, including Leonard Bernstein, Rosemary Clooney, Boris Karloff, Judy Garland and Rudolf Nureyev. The interesting trivia here is that the building has its own in-house power plant to provide heating for its notable residents, and the applicants who were rejected by the board to be residents include Cher, Madonna and Antonio Banderas. The site can now be considered strangely eerie and tragic since in the building’s entrance corridor occurred the murder of John Lennon and the building also features in the psychological horror by Roman Polanski Rosemary’s Baby [1968].

A short walk from the Central Park, there is Tiffany and Co. building on Fifth Avenue, forever made a tourist attraction because of the book and film Breakfast at Tiffany’s [1958/1961]. It may be a bit of a silly thing to do for romantics out there to come to the windows of the shop, and, in style of Holly Golightly, to see what is on display, but it is also worth to stop and admire the beautiful street clock on top of the building. Holding the clock is the nine-foot figure of Atlas, designed in 1853. While most people flock to nearby designer shops, it is also great to visit St. Patrick’s Cathedral. This is a beautiful Gothic Revival building, representing something completely different and calm in this area full of shops and hectic life. The area around the Rockefeller Centre is also very impressive in late autumn and winter when there is an ice skating rink installed. The area is surrounded by stunning buildings, and the atmosphere is cosy and bubbly.

Of course, I saw most of New York’s main sights, including the Empire State Building and Times Square, went to the Met and even explored the NYU campus, but I also thought that I would do something more or less bookish and went on an hour-long tour of the New York Public Library, which boasts some breath-taking architecture and hidden gems to discover. The guided tours of the Stephen A. Schwarzman Building are held from Monday to Saturday two times a day and they are free. A knowledgeable guide will take you through the whole of the building, from the striking Rose Main Reading Room to the recently renovated underground area. While visiting the Grand Central Station, I was also impressed by its ceiling – the depiction of a string of astrological signs. It dates back to 1913, and is based on Johann Bayer’s star atlas Uranometria [1603],  but the notable feature is that the signs are reversed from East to West. Some constellations have been added since 1913.

Finishing with the Financial District, which is the origin of New York, I visited the Ground Zero, admired the height of the One World Trade Centre (previously, Freedom Tower) – 1.776 feet, and visited the World Financial Centre. This building is worthy of a visit because, inside it, there is something unexpected: the Winter Garden. This glass-and-steel public space, with its cafés and shops, has sixteen Washingtonia robusta palm trees, re-planted in 2013 because the old ones were deemed too 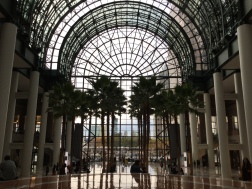 tall for the building. While walking through Wall Street, the building of the New York Stock Exchange is the one to admire. It is an impressive building of white marble, which, unfortunately, was closed to outside or tourist visits following the 9/11 attacks. During my next trip, I am planning to visit the National Museum of the American Indian, which is not far, as well as tour the UN, and pop into the area of Little Italy. It will also be interesting to discover the hidden literary location germs of the Greenwich Village, such as the Patchin Place, which was the home to poet E.E. Cummings.

To conclude, for my book-reading followers, Barnes & Noble on Fifth Avenue, Strand Bookstore and Rizzoli Bookstore (allegedly, the most beautiful bookshop in NY) are, perhaps, the ones to visit. And, in terms of food shopping, Zabar’s on Broadway should be a must on everyone’s list.