Frida Kahlo [1907 – 1954] was a Mexican surrealist painter whose artworks, mainly self-portraits, often emphasised the Mexican national heritage and dealt with the issues of gender, race and class. She was also known for producing intense self-portraits which showed her inner state of being and responses to various events in her life. The following three self-portraits of Frida are meant to demonstrate the heartbreak she experienced. 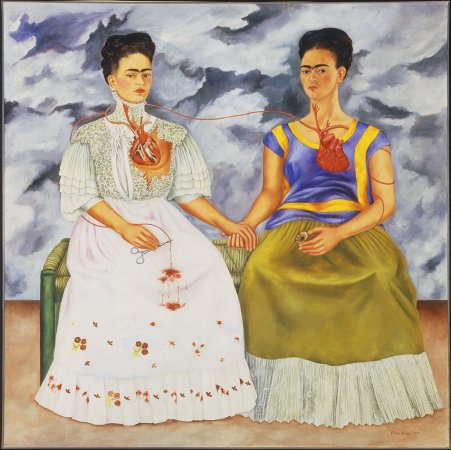 In this painting, we see two Fridas who sit alongside each other, connected to each other by a blood vessel. While one Frida wears a white European-style dress, another dons a traditional Tehuana dress. The European Frida has forceps in her hand, and one can see blood spilling on her dress from the cut blood vessel. The Tehuana Frida has in her hand a small portrait of her ex-husband artist Diego Rivera. This was the year that Frida Kahlo divorced Rivera, and the portrait, especially the two open hearts shown, clearly show her emotional pain and suffering, even if Fridas’ faces do not show any emotion and appear calm. From the scene and the blood, it seems that the European Frida is the one most affected by the break-up, since her heart is bared with all the heart chambers exposed, while the Mexican Frida still appears to have warm feelings for her ex-lover because of her intact heart and the memory token she holds in her hand. Perhaps Frida wanted to show her mixed emotions regarding Diego Rivera in this picture, and the fact that her European roots still suffer the most from the union because Rivera was so nationalistically-inclined.

This painting was completed by Frida after she found out that her sister Cristina had an affair with Diego Rivera some years previously. Though Frida here appears calm and collected, there are tears on her face, and the big human heart on the shore demonstrates the extent of her heart-break and emotional pain following the delivery of the news. The rod with the little cupid piercing Frida also shows her emotional suffering, and her school uniform and Tehuana dress in the background signal that she is still torn between her past/past (happy) memories and the painful present. The lack of arms on dresses as well as hands on Frida demonstrate the general helplessness and inability – both of the present day Frida and of her past versions – to overcome the situation.

In this painting, Frida is presented in the body of a deer that was shot numerous times by arrows. The common explanation for this painting is that Frida tried to communicate her frustration and despair following her recent failed spine surgery done in New York in order relieve her pain. The curious thing is that, in the ancient Aztec tradition, the deer symbolises the right foot, and Frida tried to demonstrate through the painting the effects of her past injury on her wellbeing (when she was young, Frida was crashed in a bus accident, seriously injuring her right leg). However, the painting may also signal her growing despair over her inability to overcome the pain that she also experienced in her previous relationships. The deer in this painting seems to be cornered by the trees whose branches are broken, symbolising Frida’s sense of hopelessness and claustrophobia, on top of her physical and emotional pain, as evidenced by the numerous arrows that pierce the body of the deer. Through this painting, Frida tried to tell us that she felt trapped within the confines of her destiny, sensing that there was no way out of her situation.