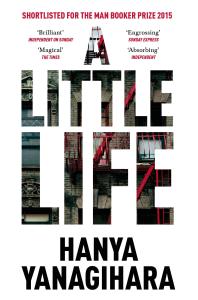 “Once we are lost unto ourselves, everything else is lost to us” (Johann Wolfgang von Goethe, The Sorrows of Young Werther).

Initially, this Man Booker Prize Nominee is about four friends who try to succeed in New York City after their graduation. Willem is a kind soul and an aspiring actor, JB is a gregarious party-goer and carefree artist, Malcolm is a grounded man, but increasingly disillusioned architect, and, finally, Jude is a brilliant lawyer, but also a man who harbours a secret past which torments him every day and every night. Will friendship and love triumph over the traumas and cruelties of life? This book does depict trauma, distress and violence stemming from the abuse of a child in the past, but, like Yanagihara’s debut, A Little Life is also a beautifully-written and intelligently-constructed novel with significant themes that must have their place in literature. Like the author’s debut, it is sometimes a painfully repetitive read, and Yanagihara drives her main message too torturously in it. However, it is incorrect to view the book as being solely about bad things happening. No person should be defined (or should feel to be defined) by the past trauma that was unfairly inflicted upon them, and the book sends an important message out, becoming a touching and emotional tribute to the power, loyalty and sacrifices of friendship and love, even if that tribute is too thickly wrapped in the pain of our main atypical and mysterious character – Jude St. Francis.

The novel starts innocently enough as four friends chitchat about apartments and money, trying to decide where and with whom they are going to live in the coming months in New York. Insight is provided into the characters of all four friends, and it is rather interesting to read about their daily lives, aspirations in the city and their curious relationship with each other. This is not least because Yanagihara’s talent for story-telling is so great and her excellent command of the language is so evident. The story plays out in the background of essentially New York’s experience, since Yanagihara draws attention to the city’s smells, food, street planning and multiculturalism. The book sometimes becomes introspective, commenting on the nature and meaning of the friends’ lives, focusing sometimes on Jude, whose journey in life is both curious and frightening to follow because it is like a rollercoaster ride, with hope and despair changing places in the driver’s seat. Jude is an enigmatic but damaged personality, and it is his past that drives the story forward since sometimes we are presented with flashbacks from his past.

If the first half of the book focuses on the dynamics of the friendship among the four friends and each of them individually (we follow either Willem or Malcolm, for example, in their aspirations and career choices), the second half of the book start to concern itself exclusively with Jude, who becomes the centre of a painful showdown or torturous literary ride to the hell and back, with the Yanagihara tightening her literary grip on her readers throats as they are forced (there is no other word) to read Jude’s battle with the consequences of his previous abuse. Since the book itself is full of over-dramatisation and repetition it is also impossible to overstate or overemphasise the emotionally- distressing elements of this story.

Someone once said that a good film/book should be like a stone in one’s shoe, and I think Yanagihara’s would not only put stones in her readers’s shoes, but some broken glass as well and force them to wear those shoes on their bare feet. That is what reading A Little Life is like. The point seems to be not merely to break our hearts, but to stamp upon them afterwards to ensure a definite kill. Sometimes references to trauma in the novel are very subtle, but as the story progresses, they become more obvious, and Yanagihara really explores every imaginable aspect of the behaviour that follows childhood trauma, noting that abuse perpetrated in childhood often means for a person some form of a life sentence. In fact, Jude is not the only person battling insecurities in the story, and, arguably, all four friends are to some degree insecure.

The novel not only portrays the copying with life traumas and the psychology of victimhood, it also explores the psychology of friendship and relationship. From the very first page, it is clear that Willem, JB, Malcolm and Jude care for one another and love each other as friends, even if some of them have their own peculiar ways of showing it and are less demonstrative. For example, JB decides to make portraits of his friends and that may also be his way of saying how much he cherishes them and their friendship: “Jude was his favourite of the three of them to paint: He was the most beautiful of them, with the most interesting face and the most unusual coloring, and he was the shyest, and so pictures of him always felt more precious than ones of the others” [Yanagihara, 2015: 35].

Comparisons can also be drawn between Yanagihara’s A Little Life and Tartt’s bestseller The Secret History [1992]. Both stories involve groups of young people, and, in particular, Jude in Yanagihara’s novel shares many similarities with Henry from Tartt’s novel. Both are brilliant and intelligent young men who are enigmatic and troubled, and who also appear not “of this world” and misunderstood. Both are respected and admired by their close friends, and Jude and Henry are both people to whom other people naturally flow. Both also experience flashes of physical pain, and they have similar relationships with their fatherly figures – past or present teachers – Henry with Julian and Jude with Harold. The similarities between the two are also evident in the endings of both books.

However, A Little Life is not perfect. It is too repetitive in the events and themes it includes, and at times the book provides too much unnecessary detail, being clearly overwritten. The book also seems to be stylistically manipulative, with the author finishing some of the chapters with long-winded sentences, which she believes to be imbued with poetic significance, but which are too obvious in their intentions to awe and leave readers pondering. There are also elements of artificiality and fantasy present, for example, regarding characters’ professional lives, especially Jude’s great success as a lawyer given his emotional instability, but the author also explained that she intentionally wanted these fantastic elements to be present. This may be in order to offset the realism and negativity, injecting some needed hope and fairy-tale into the narrative.

Hanya Yanagihara portrays courageously an important, but distressing-to-think-about issue, presenting it too honestly and unflinchingly. A Little Life really becomes a book of sorrow, but also of some hope and truth, the version of a human being people do not generally want to acknowledge or think about. The author does overstate her message on the effects of past trauma on the individual’s psyche, with the story ending up to be needlessly repetitive and too long. Nevertheless, in all its disturbing nature, this unputdownable book remains masterful throughout, shedding a light not only on victims of trauma that society sometimes chooses to ignore or inadequately fix, but also on those around these people, people who are eager to help. People’s willingness to listen and understand the situation and the person affected becomes another centrepiece of that tragedy. In that light, A Little Life is also a story of the enduring power of love, and human empathy and understanding.

Society often puts pressure on people, misunderstanding those living with trauma, and Yanagihara did something in her book that few writers would attempt or dare to do. She exposed to us completely a person combating excruciating emotional pain stemming from a horrid series of crimes and pointed out that this person’s life is no less valid or meaningful (as they sometimes wish to see it). She also criticises societal pressures placed on individuals to conform to everyone’s accepted standard of happiness. The message is that it is ok not to be ok, and people’s suffering from unfairly inflicted trauma should never be their embarrassment or personal fault.

15 thoughts on “Review: A Little Life by Hanya Yanagihara”