<<This review may contain spoilers>>

Kazuo Ishiguro’s debut novel is quite a puzzle. In the story, we first meet Etsuko, a middle-aged woman from Japan who is now residing in the English countryside, while her younger daughter Niki lives in London. As Niki comes from London to visit her mother, Etsuko starts to reminisce about her previous life in Nagasaki, Japan. We eventually start to guess that Etsuko’s memory of the suicide of her older daughter Keiko in England is somehow linked to Etsuko’s recollections of her friendship with a strange woman Sachiko and her daughter Mariko at the time that she lived in Nagasaki. This short novel is an easy and, at times, intriguing read, with Ishiguro sometimes making insightful points about Japanese culture and the effect of the passage of time on his characters. However, it seems that this subtle novel also asks too much from its reader. If there was a mystery somewhere in the novel’s midst, then it was not sufficiently elaborated upon or given sufficient space to breathe for the reader to really care; and, if there was no real mystery, then the point of the novel is partly lost. Ishiguro seems to have wrapped his story in too many layers of subtlety, thereby forcing his readers to make a giant leap forward in terms of imagination so that they finally decide to start unwrapping the unwrappable. It is unlikely that there will be a satisfactory meaning or explanation found by the novel’s end. Besides, while the reader may want to delve into possible interpretations of what he or she has just read, there is also the possibility that the interest will be lost half-way through.

A Pale View of Hills feels personal to Kazuo Ishiguro as the author came to the UK from Japan at the age of five and, like its characters, also experienced a cultural transition. Firstly, the novel contrasts western and eastern mentalities as Etsuko and Sachiko, Etsuko’s strange woman neighbour, converse with American guests in Japan. It also clearly makes a distinction between one daughter of Etsuko – “westernised” Niki on the one hand, and the second daughter – Keiko, on the other, who apparently found it difficult to adjust to her new life in the UK. It could be argued that, even the novel itself is written in a Japanese style since most of its dialogue feels artificial and awkward, with characters not feeling completely at ease with one another, being keenly aware of the social hierarchy. As we follow Etsuko’s narrative we also note that, when she lived in Nagasaki in the 1950s, her family was already becoming aware of traditional Japanese values slowly being displaced by western beliefs, and Etsuko’s father-in-law, in particular, notices the shift in loyalties.

Roughly, there are two main connected themes in the novel: (i) the unreliability of memory and the incapability to distance oneself from past traumatic events; and the subsequent usage of (ii) the psychological dissociation and imaginary/mistaken association as mechanisms to make peace with the past and to overcome self-blame and grief. In fact, there is a line in the novel which refers to both: “It is possible that my memory of…events will have grown hazy with time, that things did not happen in quite the way they come back to me today. But I remember with some distinctiveness that eerie spell which seemed to bind the two of us [Etsuko and Sachiko] as we stood there in the coming darkness looking towards that shape further down bank” [Ishiguro, 2005: 41]. Here, Etsuko acknowledges that her narrative may not be reliable, as well as admits that she did feel an “eerie” connection with Sachiko.

Regarding the “memory” theme, the first clue starts with the title. A Pale View of Hills brings to mind the indeterminacy and the subjective nature of human vision/memory. The title may refer to someone who is no longer seeing her picture clearly, which may also be the events in her past. Etsuko tells us at one point “Memory…can be an unreliable thing; often it is heavily coloured by the circumstances in which one remembers” [Ishiguro, 2005: 41]. There are also hints throughout the novel of the dream-like nature of the story events. Etsuko refers to dreams and Sachiko refers to make-believes, and the emphasis is on the confused perception, with the narrator also refusing to talk openly about what is really bothering her. Thus, we may notice that the major preoccupation of Etsuko (or of her subconscious) is older women, possibly mothers, and little girls.

On some level, Etsuko may be unable to accept the suicide of her daughter Keiko and her believed part in it and, thus, constructed a different reality around it with her being blameless. However, her subconscious seems to project the traumatic memories outwardly in her narrative, and, as we read on, we come across such “misplaced” suicide “artefacts” as a willow tree, a rope, a young girl being injured and murdered children. Mariko, Sachiko’s daughter, also draws Etsuko’s attention to the haunting presence of one woman “who lives across the river”, and whose existence Sachiko dismisses as fantasy. Traumatic memories flood Etsuko’s otherwise innocent narrative, sometimes dominating her mind, but she still presents them as distanced and unconnected-to-her events in order to protect herself from them. For example, Etsuko treats a piece of rope as an ordinary object being accidentally entangled with her foot, but it is still there. 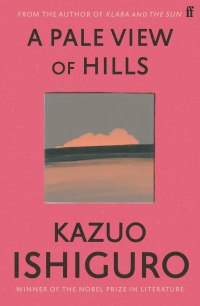 Even if the “memory” theme is more or less convincingly established in the novel, the second theme of copying with trauma by dissociation/mistaken association requires quite a big imaginary leap on the part of the readers. Dissociation is a psychological process whereby one disconnects from one’s thoughts or memories, sometimes following traumatic events, in order to cope better. One interpretation of the story is that this is exactly what is happening to Etsuko as she narrates this story of her friendship with mysterious woman Sachiko in Nagasaki. One possibility is that Sachiko and Mariko, her daughter, were real people in Etsuko’s life and she tries alleviating her mental burden by hinting at her grief and blame through them. Another possibility is that Sachiko and Mariko were never real, but, by talking to us about them as though they were, Etsuko manages to dissociate herself from her guilt/grief and come to terms with it.

Either way, Etsuko’s identification with Sachiko is evident because the two women and their respective daughters share many similarities. Both women decide (have decided) to leave Japan for a western country, taking their daughters with them, hoping that this decision will be best for their daughters, but, probably knowing in their hearts that it will not be. In the end, Etsuko’s daughter Keiko never managed to become happy in the UK and committed suicide. Thus, to probably redeem herself in her own mind, Etsuko openly disapproves of Sachiko’s thoughtless care of her daughter Mariko. Like her future daughter Keiko, Mariko is a very troubled child and often runs away, with Sachiko hardly being concerned about her. In fact, Etsuko seems more concerned about Mariko’s wellbeing than her own mother. Relying on the theory of dissociation, it becomes convenient for Etsuko to blame another person for what has happened, and now show compassion for the little girl of Sachiko. In real life, she may never have done that regarding her own daughter.

Like Sachiko, Etsuko may have also craved independence and a foreign-born lover, and now also feels guilty because her relationship with her daughter Keiko was never too good. Even when Etsuko is pregnant with Keiko in the novel, other people notice that she may not be happy, but Etsuko assures them that she is. Also, similar to Sachiko’s odd relationship with her daughter Mariko, who sometimes does not even acknowledge her mother’s presence, Etsuko may have also only displayed aloofness, pride and morbid curiosity in relation to Keiko. This is because Etsuko admits to us at one point that, when she first heard that her daughter was found hanged in her room in Manchester, her first thought was to wonder how long Keiko hanged there – hardly the first thought response of a loving and caring mother.

Similar to the author’s later best-selling novel The Remains of the Day [1989], A Pale View of Hills may be viewed as being concerned with the human inability to say something important openly in order to alleviate one’s mental burden. The formality of behaviour required and the denial lead to hopelessness, when the heart obviously screams the opposite and wants to believe. Even though A Pale View of Hills may be considered as this thought-provoking piece whose character, riddled with guilt, is unable to make peace with the past and subconsciously struggles, readers of the novel still have to impute too much meaning to the story, which is not there on the face of it. Some major clue is left behind at the end of the novel, but it is not nearly enough or too late to interest and intrigue.

Kazuo Ishiguro’s debut novel may be disturbingly enigmatic, as well as admirable in the way it tries to explore the meaning of memory, the effect of the passage of time on people and their faculties, and the mechanisms they may employ to come to terms with unfortunate events. A Pale View of Hills will also leave its readers with a myriad of possibilities to consider, but only for them to discover later that, probably, much guesswork has been futile here. This is because the author simply made pivotal elements of the book too subtle for anyone’s taste, resulting in the unsatisfying book, whose meaning simply gets lost as the readers are forced to go too far in their imagination to find it.

5 thoughts on “Review: A Pale View of Hills by Kazuo Ishiguro”