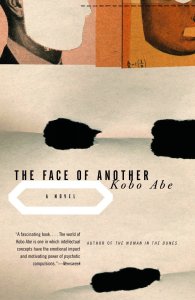 After enjoying The Woman in the Dunes [1962] over the summer, I have now read The Face of Another by the same author (translated from the Japanese by E. Dale Saunders). In this story, which is narrated through three notebooks (diaries), we are told of a scientist who gets facially disfigured while conducting an experiment in a laboratory, and struggles from then on to fit into the society with his disfigured face. He manages to make a mask that is indistinguishable from a real face, but soon finds out that his problems have only just began as his personality also starts to change. There is something from Frankenstein [1823] in this novel, something from Strange Case of Dr Jekyll and Mr Hyde [1886], something from The Invisible Man [1897], something from Steppenwolf [1927], and something from Franz Kafka and Ernesto Sabato as well, resulting in this novel being a psychologically and philosophically delicious journey into the dark recesses of one increasingly damaged mind.

There are a number of ways to write a review of this book because there are a number of interpretations one can focus on. I will emphasize in this review the link between the face and identity, and the resulting psychology and existential crisis. In The Face of Another, the main character (the scientist) learns fast after his lab accident that one’s presentable face is essential for societal acceptance. His face is so horribly disfigured that he has to bandage it and then go out into the world, with the result being that people stare at him and feel embarrassed. The scientist also realises that one’s face provides a special key to one’s identity. By losing his face, the narrator feels like he lost something very important – not only the means to make normal communication with the outside world possible, but also some path through which he can see himself, who he really is and connect with himself (perhaps, with his mental image of himself). We become aware of the ensuing existential crisis of the narrator through three notebooks which he left behind. In them, he hints at some terrible act that he has committed, but we as yet know nothing about, and at his dissatisfaction with the societal response to his disfigurement. “Shut off by a wall of affability, I was always completely alone” [1964: 10] and “yet it was not I who should feel ashamed. If there was anyone who should suffer, was it not rather the world that had buried me alive, that made no attempt to recognise a man’s personality without the passport of the face?” [1964: 98], writes our narrator in one of his notebooks.

The narrator of the notebooks (the scientist) then makes a decision to make a mask which is indistinguishable from a real face to begin a new life as an acceptable member of society. Since the narrator is a scientist, he approaches every problem with an analytical mind. He consults an expert in cosmetic surgery, as well as an expert in palaeontology, finding out that facial movements and wrinkles would be the hardest to replicate in any artificial face. When our narrator finishes his mask, that would make him finally a normal human being in the eyes of many, and then tries it on, he is not sure if its effects are as desirable anymore. At this point, The Face of Another plays interestingly with an ancient notion that states that a man is capable of anything provided that he wears a mask. The idea here is that when a person veils his identity, he is capable of thoughts and actions his normal self would not even dream of. In this sense, Kobo Abe explores in The Face of Another a situation whereby a mask provides one with special liberation and empowerment, changing the wearer’s personality, making him do strange things. After all, the majority of public actions are only being restrained or propelled by societal expectations – they should reflect those expectations and we act accordingly.

The great aspect of the novel is that we do not quite know what to expect from the narrator or where his new transformation would take him. At the start, we do not even know the nature of an incident that led to his disfigurement because the scientist in his journal chooses to focus on the room that he started to rent and on his laboratory work, rather than on what we really want to know – what horrible thing did the narrator apparently commit? This focus on insignificant things makes for an intriguing read since we have no choice but to fill the gaps in knowledge with our own horrifying conclusions. Also, like in The Woman in the Dunes, there is a big contrast in The Face of Another between the relative calm of the beginning and the chaotic, almost insane, realisations coming to us readers seemingly from nowhere in the novel’s second part. Near the end of The Face of Another, one very interesting psychological situation occurs involving the wife of the scientist, who has also struggled throughout the story to come to terms with her husband’s transformation. Despite the novel’s slightly rambling and repetitive nature, its conclusion feels strangely right and elegant.

The Face of Another would be a delightful book for those who like introspective books which focus on the mind of a main character thrown into an extraordinary situation. The book is a psychologically intense character study of a man grappling with the realities of his facial disfigurement (stigma and alienation), as well as with the realities of his newly found, even if artificially-constructed, identity.

This review was written as part of the 14th Readers Imbibing Peril Reading Challenge.

14 thoughts on “Review: The Face of Another by Kōbō Abe”