The New Yorker is an American magazine that features reporting, essays, criticism, cartoons and poetry. It was launched in 1925 and is also known for its satire and humorous commentary on popular culture and social issues. Its striking magazine covers (often satirical in nature and depicting funny versions of one’s everyday life in the city) have been in the spotlight for many a time, for example, due to controversy. Below are some of my favourite covers from the past years, which I have allocated into three categories depending on what they present: (i) The “Reach” of New York City; (ii) Technology; and (iii) Everyday Life. 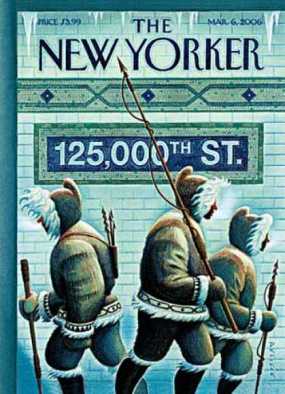 I. The “Reach” of New York City

New York’s subway has often been the topic of covers, and the artworks above by Eric Drooker satirise the reach of New York City’s underground system. It seems that the city has grown so big and become so expansive (modern developments, further urbanisation) that one can now reach far-off corners of the world, with the left picture depicting one man who finds himself in the middle of a jungle after his subway ride, while the picture on the right shows men who reached 125, 000th St. 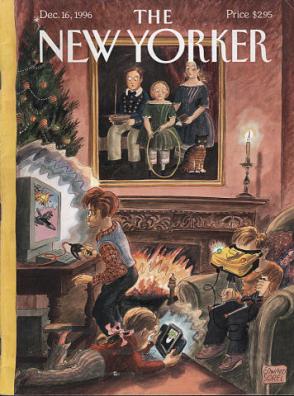 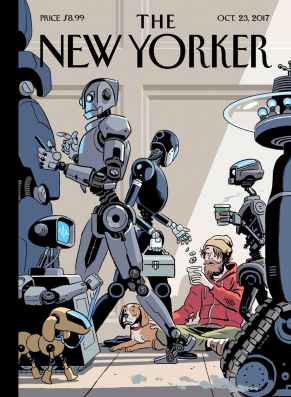 The two pictures above show the advancement of technology in the modern age. The image on the left by Edward Sorel shows children in the 1990s engaged with their Nintendo games while their child counterparts from old times in the portrait view their activities with surprise bordering horror, clutching their hoops and outdoor toys. The artwork on the right by R. Kikuo Johnson shows the proliferation of robots and robotic technology that have now seemingly taken over the world. The irony is that humans are beggars now and successful robots help them out in life – the image’s title is also witty – “Tech Support”. 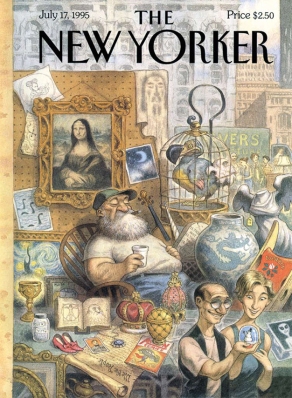 The left artwork titled “The Treasure” by Peter de Sève probably satirises the shopping experience. It shows a store filled with masterworks and rare historical artefacts of every kind, from a crown, exotic animal and a photo of the Loch Ness Monster to a Mona Lisa painting and a Van Gogh masterpiece, and yet the tourists in the picture have chosen to buy and carry away with them a miniature snow globe with a snowman inside. The artwork on the right by Peter de Sève shows a “Brooklyn” man trying to style his hair in a perfect “Zyan Malik” man ban/top knot using a “manual” – it looks like a sailing knots manual in this case.